9 Signs of Passive Behavior. Are You Being Too Selfless? A Guest Post by Carthage Buckley 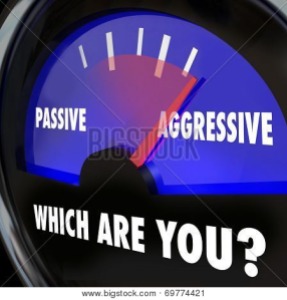 Passive behavior is where you sacrifice your own preferences and needs, so that you can help others to meet their preferences and needs. There will be times in your life when you need to be passive, or, where being passive at that moment will allow you to build a positive relationship in the long run. The problem arises when you are consistently passive. If you want to be happy, you have to be able to pursue your own goals and objectives with confidence.

Passive behavior will not allow you to do this. In fact, consistently displaying passive behaviour will encourage others to take advantage of you, either consciously or subconsciously. In the short-term, you feel that you are being approved of by the other people, and you may view this as a positive thing. However, in the long-term, you will be required to make bigger sacrifices if you wish to maintain their approval. Eventually, you will be filled with a sense of resentment.

The following list highlights some of the most common signs of passive behavior. The list is not exhaustive but it should serve to provide you with a good knowledge of what passive behavior looks like.

The passive individual often seeks the approval of others with their speech. They are incredibly fearful of upsetting others so they attempt to soften the impact of their comments through permission seeking. This often results in rambling statements which do not seem to say a whole lot e.g.

As they lack confidence, passive people tend to lack any form of certainty when they are expressing their opinions. You will hear them stop, start, and hesitate. Their speech pattern will lack any rhythm or flow. The hesitations are often accompanied by ‘err’ and ‘um’ or similar noises.

3. Belittling their own views

The fear of upsetting others often results in them belittling their own views before they have even expressed them. Rather than wait for someone else to comment on their views, they try to soften the blow by striking first, e.g.:

4. Putting the preferences of others first

The approval seeking nature of passive behavior leads the individual to place a higher value on the preferences and needs of others than they place on their own. They eagerly demonstrate that they are willing to sweep their own preferences aside, e.g.:

We are all fallible but passive people often struggle to accept that. While they may make few demands of others, they make very high, often unrealistic demands of themselves. When they fail to meet these, they often resort to extremely harsh self-criticism. If something goes wrong, they tend not to see the role played by others. Instead, they place the full blame on themselves, e.g.:

While many people use self-deprecation as a form of humor, passive people tend to be quite serious when they resort to it. They put themselves down at the first opportunity, over the smallest things, often to the bewilderment of anyone within earshot, e.g.:

Avoiding eye contact is one of the most common signs of passive behavior. Due to lack of confidence, shame, guilt or a host of other negative emotions; the passive person is unable to look into the eyes of the other person. They try to look away, often at the ground, in order to avoid eye contact.

Whether with their facial expressions or their body language, passive people send clear signals of their discomfort. Even when they are trying to act confident their appearance of discomfort will be a giveaway. Learning to communicate effectively plays a big role in overcoming passive behavior.

Passive behavior is driven by your need for the approval of others. Rather than risk upsetting them, you put their preferences and needs before yours. This is not healthy behavior. It is important to have respect for others, but you will never accomplish your goals and dreams unless you learn to give them the respect they merit. Passive behavior is ineffective because there is only so much self-sacrifice you can take. Eventually you will snap, either with yourself, or with the people whom you have been trying to please. Neither of these outcomes is desirable as they can create long lasting damage to both your health and your relationships. The list above is certainly not exhaustive but it will provide you with a good idea of the behaviors which you need to be looking out for. If you find yourself displaying any of these behaviors, do not be harsh on yourself. Simply, identify the changes you need to make and make them. It will take a little time but you will become a more assertive person.

Want Your Vision to Stay Sharp and Healthy? Check Out These 11 Preventative Eye Care Tips A Guest Post by Aaron Barriga

Is Meditation In the Workplace a Good Thing or Just Another Wellness Hack? A Guest Post by Vytautas Vaitkevicius