Cover Story: Bullying in the Workplace A Guest Post by Don Sandler 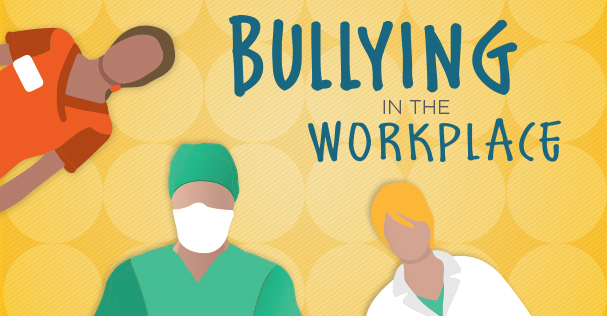 The topic of bullying has gotten a lot of attention in recent years as the negative effects of the bullying suffered by children have become more apparent. Children are being encouraged to report bullies and stand up for friends who are bullied. Unfortunately, children aren’t the only ones who are suffering at the hands of bullies. Bullying has long been an under-the-radar problem in the OR, but it is starting to attract more attention in the health care industry.

It’s going to take courageous souls willing to speak up and courageous hospital leadership that’s willing to implement regulations with teeth and enforce them in order for bullying in the OR to stop.”
– Phyllis Quinlan, PhD, RN-BC

How Prevalent is OR Bullying?

This is due in part to The Joint Commission identifying “intimidating and disruptive behavior” in a Sentinel Event Alert as fostering medical errors and contributing to poor patient satisfaction and preventable adverse outcomes (Issue 40, July 9, 2008). Also, studies are revealing just how prevalent bullying really is in the OR.

For example, in a study conducted by the Association of periOperative Registered Nurses (AORN) in 2013, 59 percent of perioperative nurses and surgical technicians reported witnessing coworker bullying on a weekly basis, while 34 percent reported witnessing at least two bullying acts per week.

Bullying was also consistently listed by respondents to the 2015 OR Today Readership Survey as a problem in the OR. For example, Carol Giese, MSN, RN, CSSM, CNOR, the manager of surgery and anesthesia at CHRISTUS St. Michael Health System in Texarkana, Texas, noted that lateral violence is among the top five most pertinent issues for OR nurses and surgical techs.

“I have observed this lateral violence in the OR throughout my entire 30-year career in perioperative nursing,” says Giese.

A study conducted by the Robert Wood Johnson Foundation revealed that nurses are more likely to be bullied if they’re young, working on the day shift or working in an understaffed unit. It identified a number of ill effects of bullying in the OR, including poor work group cohesion, more work-family conflict, and poor relations between nurses and surgeons.

So what exactly constitutes “bullying” in the OR? In the Sentinel Event Alert, The Joint Commission states that “intimidating and disruptive behaviors include overt actions such as verbal outbursts and physical threats, as well as passive activities such as refusing to perform assigned tasks or quietly exhibiting uncooperative attitudes during routine activities.”

These behaviors “are often manifested by health care professionals in positions of power,” the Alert continues. “Such behaviors include reluctance or refusal to answer questions, return phone calls or pages; condescending language or voice intonation; and impatience with questions.”

Why does bullying occur in the OR? Obviously, the OR is a high-stress environment, and some surgeons just aren’t good at controlling this stress. Workplace bullies tend to want to be in control of all aspects of the work environment, and this certainly holds true for bullying surgeons in the OR.

Phyllis Quinlan, PhD, RN-BC, the president of MFW Consultants, says that the problem of bullying in the OR goes back many years.

“For a long time the attitude at hospitals was to keep the surgeons happy no matter what because hospitals couldn’t afford to lose them,” she says. “It was the Golden Rule: He who has the gold makes the rules.”

Quinlan says The Joint Commission’s Sentinel Event Alert about bullying was a turning point in the issue of bullying getting the attention it deserves.

“In fact, this led to the ‘stop the line’ practice in the OR in which anyone in the OR has the right to speak up and stop the procedure if they don’t think something is right,” she says. “Before this, heaven forbid if anyone questioned a surgeon.”

ChrysMarie Suby, the president and CEO of the Labor Management Institute, says that bullying in the medical profession, and in the OR specifically, is not uncommon.

“In my work, I see it coming from three sources in the OR and other perioperative units: patterns of condescension, secondary bullies who have learned how to survive in the organization, and institutional bullies,” says Suby. “The latter are managers, charge nurses, supervisors, service line directors, and C-suite and administrator-level leaders who bully those below them.”

“I have seen different variations on bullying in the OR every since I first became a perioperative nurse in 1991,” says Diana Lopez-Zang, RN, CNOR, the director of system perioperative education at Northwell Health. “A big reason for bullying is the hierarchical environment in the OR.”

Lopez-Zang says she has actually seen surgeons throw instruments in the OR, and one time an OR nurse was hit in the ankle with a dirty instrument.

“Mostly, though, bullying consists of verbal abuse by surgeons, including cursing,” she says.

“Bullying in the OR is still a problem today that I think it’s going to take some time to resolve due to the long history,” Lopez-Zang adds. “Unfortunately, I don’t think it’s getting much better yet — anecdotally, I’d say it’s about the same as it’s always been.”

According to Suby, awareness of the problem is a good first step toward minimizing and eventually eliminating bulling in the OR.

“However, nothing will change and the problem will only get worse if nothing is done to intervene,” she says.

“We see frequent examples of OR staff who are being bullied via unfair scheduling practices,” says Suby. “It is usually new nurses and those with less seniority who are bullied in this way.”

Once your hospital has conducted a scheduling audit, address the findings of the audit and involve human resources and professional committees to be sure that discipline policies are being used and codes of conduct enforced.

“We often find that organizations have these in place but victims are being intimidated from using them,” says Suby.

“With the audit’s findings in hand, hospitals can provide education and training to help fix scheduling and staffing conflicts at their roots,” she adds.

Quinlan says that solutions to OR bullying can be narrowed down to two main things: peer pressure from others in the OR to stop bullying behavior, and HR regulations, policies and procedures that create a zero-tolerance environment for intimidating, disruptive and uncivil behavior.

“Education and remediation are also needed to put a stop to these behaviors that can put both OR personnel and patients at risk,” adds Quinlan.

In fact, she says that families of patients are starting to report conflicts between surgeons and perioperative nurses due to concerns that these conflicts are putting their loved ones at risk.

The good news on the OR bullying front is that younger perioperative nurses who are entering the field today are less likely to tolerate bullying than many nurses may have been in the past, according to Quinlan.

“Many Generation X and Millennial perioperative nurses have taken a stance on what’s right and wrong,” she says. “They often tend to be a little more idealistic and they want to stand up and make a difference for the profession.”

“It’s going to take courageous souls willing to speak up and courageous hospital leadership that’s willing to implement regulations with teeth and enforce them in order for bullying in the OR to stop,” says Quinlan. “Nothing’s going to really change until these things happen.”

Originally featured in OR Today, May Issue    http://ortoday.com/

MFW Consultants to Professionals was founded in 1994 by Phyllis S. Quinlan, PhD, RN, NPD-BC. Over the past 25-plus years, the Firm has grown into a full, multiservice consulting company.